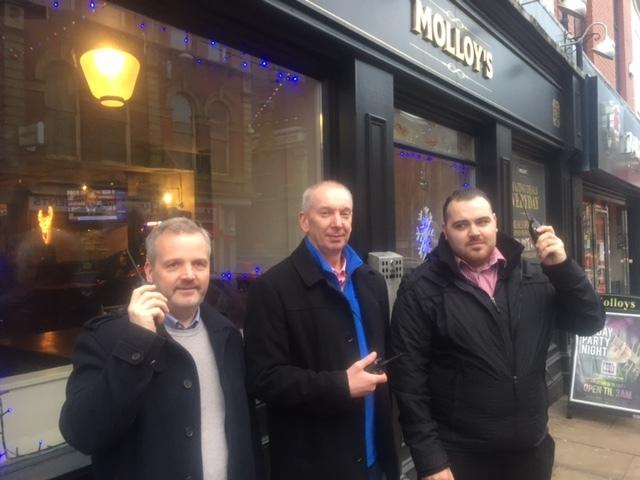 A ‘PUBWATCH’ scheme which will link by radio licensed premises, the police and CCTV operators is to be re-launched next week.

Those behind the scheme say it will make Blackburn town centre at night a safer place and hope it will engender team spirit among the pub and bar trade.

Blackburn Business Improvement District (BID) have funded 15 hand held radios which will be distributed to the pubs taking part and link them together, along with police officers.

There will be a meeting with licensees on Tuesday, December 6 at 2pm a Blakey’s Cafe Bar, Northgate for licensees and police to discuss the scheme.

The town’s previous Pub Watch scheme was switched off by OFCOM due to license fee issues in February 2015, leaving the night time businesses with no radio communication.

Ron O’Keeffe is part of the Blackburn Businesses Against Crime.

He said: “The suggestion is to link the it in with the very successful Shop Watch scheme run by BBAC.

“The radio link has direct contact with the police and other radio holders and the hire of a radio will be just £1 per week.

“The links will mean incidents can be dealt with quickly and information can be shared.

“There are similar schemes in Darwen and Clitheroe and the Blackburn one will hopefully be as successful.

“If it works well we will hopefully expand it to premises like taxi offices and restaurants.”

The move comes after recent new bar openings boosting the town with the Sir Charles Napier and Cellar Bar re-opening and the town’s first micropub, The Drummers Arms starting up last week.

He said: “I used to work at the Bridgewater in Darwen and the radio scheme was very useful.

“It will give both staff and customers reassurance and be helpful to the night time economy.”