A Pubwatch scheme has been revived in Grantham, bringing the town’s hospitality owners together to crack down on those causing trouble.

Chaired by Chris Knowles, landlord of The Black Dog pub on Watergate, the scheme aims to make every venue involved a safer place for both staff and customers alike.

Chris, who has been landlord at The Black Dog since 2013, helped to run a similar Pubwatch scheme in Leicester, and believes he can transfer his skills and experience to ensure that Grantham’s is also a success. 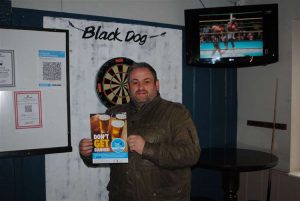 Chris Knowles, landlord of the Black Dog and chair of Pubwatch Grantham.

Pubwatch meetings will take place once a month at The Black Dog, and can be convened in the event of a serious incident.

Chris said: “Something needed to be done in the town to bring the licensees together, show some unity and make Grantham safer for punters.”

The scheme, run in conjunction with Lincolnshire Chamber of Commerce and Lincolnshire Police, was established in September last year, but because of Covid regulations it has not been needed since November when pubs were forced to shut.

Chris said: “We had quite a bit of trouble in the town last year. Something had to be done.”

If someone causes trouble in one venue, the owners will be in radio contact with all the other businesses in the scheme within minutes.

There was a Pubwatch scheme in Grantham in 2014 but it did not last, and there were calls in March last year for it to return after an assault which left a man with a serious head injury. He died days later.

Following the attack, a former Pubwatch chairman called for the return of the scheme to make it a “safe night” for all.

Chris said that after the unprecedented times of the Covid-19 pandemic “everyone [involved] is well up for it”.

He said that it is important for Grantham’s pub owners to “have each other’s backs”.

“If everyone’s pub is a safer place, it makes it easier for everyone and safer for punters”, said Chris.

“As long as it’s run properly, it’s a great tool. Previously in the town it’s not been run very well, so I’m hoping this time around we do a good job.”

Grantham’s Pubwatch is supported by the Lincolnshire Chamber of Commerce.

Chief executive Simon Beardsley said: “We run a number of Pubwatch schemes across the county which have proved a very effective tool to assist pubs if faced with crime or anti-social behaviour and we are delighted to be supporting this one in Grantham.

“As we start to see restrictions being lifted, this scheme is going to be a vital part of the recovery of our town centres, ensuring they return to being vibrant and safe places to live, work, study and
invest in.

“Reducing crime and anti-social behaviour is always on pub owners’ minds, but at a time where these businesses have been closed for considerable amounts of time and now having the worry of complying with Government Covid restrictions and keeping their customers and staff safe, this scheme aims to provide peace of mind, mitigating the risks around crime and anti-social behaviour and ensuring the security, safety and peace of mind for visitors and businesses alike.”