12/8/21: Story and photograph courtesy of The Guildford Dragon www.guildford-dragon.com

Guildford’s Pubwatch scheme has declared the Euro 2020 football tournament a success for local pubs with only two football related incidents in the borough and none in the town centre.

Jane Lyons of the Keep pub in Castle Street, who chairs the Pubwatch scheme said: “It was quite an achievement for such a big social event to have gone so smoothly.”

The rescheduled tournament, postponed from 2020 due to the pandemic, took place from June 20 to July 11, 2021. Italy won the tournament, beating England in the final after a penalty shoot-out.

Ms Lyons added that the police were “impressed” comparing it with the 85 football-related incidents throughout Surrey.

And that Pubwatch members worked hard to prepare for the influx of people attending their licensed premises, particularly when the England team was playing.

Ms Lyons also said that members assisted the police and other interested parties by producing a spreadsheet of licensed premises of those screening and not screening the football matches on TV.

“They also shared a generic risk assessment with the venues, added Ms Lyons, “with guidance including ticketed entry, plastic glasses and police visits before the events”.

Guildford Pubwatch members are licensees from not only pubs, but the wider hospitality businesses, including the Casino night club, The County Club and a number of restaurants such as Olivia and Positano.

Ms Lyons said Guildford’s Pubwatch members have formed a strong community that has developed a positive partnership with Experience Guildford (the town’s business improvement district), and the police.

Guildford Pubwatch members are now looking ahead to the football World Cup taking place in Qatar throughout November and December 2022. In anticipation of extra trade at what is a busy time of the year anyway, Ms Lyons said, with a wry smile: “It will be fun with the Christmas trade and the World Cup at the same time.” 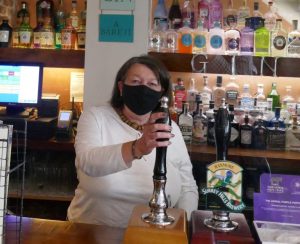 Jane Lyons, who chairs Guildford Pubwatch, pulling a pint at the Keep in Castle Street.

She manages the Keep pub in Castle Street with partner Brian. Brought up in Pirbright, she said the Keep was the first pub she ever had a drink in, “very underage”.

Adding: “At least it was a managed environment. The availability of drink in supermarkets now is a problem. Pubs are regulated, it’s almost impossible to get an underage drink in a pub now. So they drink at home or in the park.”

The opening up again of hospitality, with no regulations on masks, signing in or table service, is posing its own problems with “pubs being so diverse”. Ms Lyons said pubs were “very age-profiled” and that affects how venues decide to manage their approach to Covid safety.

“We have maintained table service at the Keep, like a lot of places. We can engage with our customers more, be more friendly and upgrade our customer service, but different bars are taking different decisions.”

On vaccination passports, Ms Lyons recognises it is “a thorny subject”. She said the problem was focusing on a particular group. “Some venues probably don’t require it, but then are you discriminating against a particular age. There’s no easy answer.”

Amanda Masters of Experience Guildford said: “The venues managed the Euros splendidly. Patrons were respectful of the different circumstances we are in and were very grateful to be able to enjoy the matches in their favourite bars.

“The late-night venues are very much waiting to see what the guidance looks like before forming any real opinion on the [Covid] passports. Whatever details are to come, the late-night venues will react accordingly and operate in as safe a way is possible.”

Last word to Jane. “I think a lot depends on how bad the Covid variants get and if it gets worse. It will be awful if we get shut again in the autumn.”