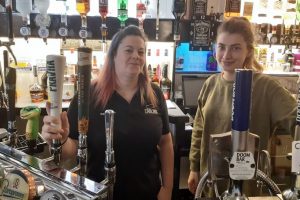 Emma Dow and Shannon Joosse, landladies of the Garland Ox pub in Bodmin

The landladies of a pub in Bodmin say they have had to resort to banning punters from the premises for breaking social distancing guidelines as they strive to keep everyone safe.

Emma Dow and Shannon Joosse, landladies of the Garland Ox, said while many are doing all they can to social distance, there’s some that they’ve had to ban for ignoring the rules.

Emma said: “Most of the time, people are really good but we’ve had a few that have completely disregarded the rules at all. When we confront those who we’ve had to ban, they turn around and usually just say ‘I’m sorry, I’m drunk or I don’t care, I’m having a good time’.

“Well, sorry no; it doesn’t work like that at the moment!

“We gave them several reminders that they need to remain at their tables and not go to the bar, and after they’ve continued to ignore it they’ve had their drink taken off them and asked to leave. With the help of the other pubs in Bodmin, we’ve put people we’ve had to remove onto Pubwatch which means they are banned from all pubs in Bodmin because they’re just not following the rules.

“There have been some people who because it is table service, they aren’t used to that so they do try to come to the bar and we ask them to go back to their table and we’ll come over and see to them shortly. The first night after reopening was extremely difficult to manage as people were excited to be back, but it’s settled down since then”

The pair said that as a business trying to recover after months of being closed, a second lock-down could see them out of business in a matter of weeks if there’s no support.

Shannon said: “We had a small amount of money in reserve that we used when the last lock-down happened so at the moment we are scraping by. If there was a second lock-down we could survive for a maximum of a couple of weeks.”

Emma added: “When the first lock-down happened, we still had bills to pay, rent and staff. It was great when they brought the furlough in, but that didn’t happen for three months, the same with the business support grant.”

It seems their reopening has been welcomed by customers, with Emma saying “The locals have definitely supported us and mostly followed the measures and often say it’s nice to be back in the pub.”

There have been many changes at the pub since the start of lock-down in March and they stretch well beyond the colours of the newly painted walls and bar.

One of the things affected is the atmosphere experienced by those who visit, and not just because of the new measures.

“There’s no atmosphere like there was before because obviously people want to see their friends but are limited to two households to a table,” said Shannon.

Emma added: “Usually at our pub, everyone wants to stand at the bar and be social but the current rules mean they can’t do that.” 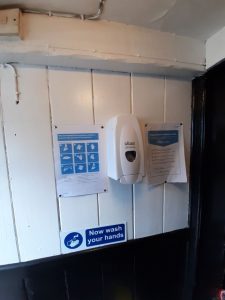 As customers arrive at the Garland Ox, they’re immediately faced with a reminder of the times we live in- with information sheets explaining the rules as well as a newly installed sanitiser point, one of several around the venue.

Central to the “new normal” for pubs that have reopened since the changes in the lock-down restrictions is a vastly increased cleaning regime, a demand made more challenging by the requirements to provide table service on limited staffing levels.

Shannon says the extra requirements to keep customers safe adds up to a lot of extra work and expense for venues recovering from the impact of lock-down.

“Before the coronavirus we’d obviously do a clean of all surfaces at the end of the night and again in the morning before we opened up,” she said. “Now, everything is cleaned at least once an hour, if not more. Things that might have been cleaned once a day such as a handrail or back of seats are now cleaned every time they are touched or sat on. All of the facilities such as the gambling machine, pool table, jukebox are done at least on the hour, each hour even if no one has touched it.

“We’ve also had to go down to restricted hours. When we first reopened we had two members of staff on at a time but due to the amount of money we were making, we had to cut that down while making sure we’ve got enough staff to clean every hour and making sure people are abiding with the rules while we operate with table service. It’s a challenge.”

Emma said: “Because there are more cleaning products and facilities we’ve installed ranging from sanitiser dispensers for the customers as well as for staff to blue roll in the toilets instead of people spraying water from their hands when using the dryer, there’s a lot more expense to running a pub. We’ve also invested in signage for the floors and information sheets on each table explaining the rules such as the one-way system or where to go for a cigarette. We want people to feel safe when coming into the Garland Ox.”