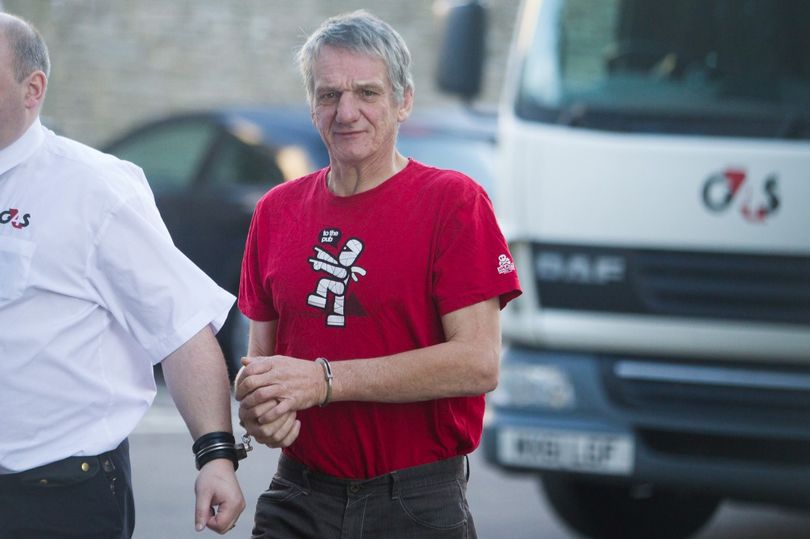 Ronald McFarlane wearing a “to the pub” t-shirt while sentenced.

RONALD McFarlane, 57, was found behind the wheel last month after an all-day drinking session at Brechin Music Festival. A drink driver more than six times over the limit was jailed yesterday after he sat in the dock wearing a T-shirt with the slogan To the pub.

Ronald McFarlane, 57, was found behind the wheel last month after an all-day drinking session at Brechin Music Festival. He had been banned from the road three times for drink driving Forfar Sheriff Court heard.

The sheriff branded his actions horrific – and jailed him for 10 months. Prosecutor Cheryl Clark told the court: On August 30 a friend of the accused drove him to attend a music festival in Brechin. They both had pet dogs in the vehicle. They had been drinking in the pubs all day. At 7.30pm, the accused went to walk the dogs. He drove the vehicle along to Market Street to buy cigarettes at the Co-op, which was about 300 metres away. A member of the public saw McFarlane clearly under the influence in the shop. The alarm was raised and police found him driving the motor. They pulled him over and the prosecutor said he was heavily under the influence and was struggling to stand.

Jobless McFarlane, from Brechin, pleaded guilty to driving a car with 137 microgrammes of alcohol in 100 millilitres of breath. The limit is 22. Defending, Norman Bruce said: Unfortunately he had been given the keys to the car to walk the dogs. He realised he had run out of cigarettes and decided to drive.

Sheriff Grant Thorley jailed McFarlane for 10 months and banned him from driving for 10 years. He said: Theres no alternative here to a custodial sentence. I see the reading in the complaint is horrific and even if we go back to the old limit, it would still be a significant one.