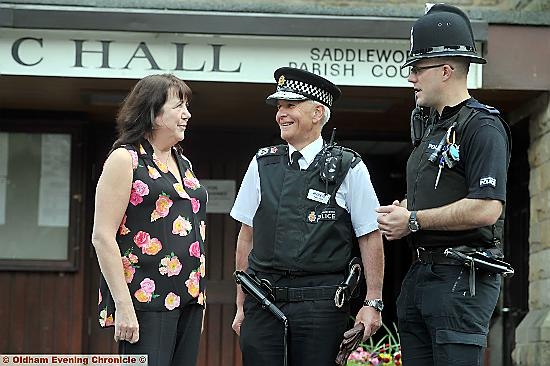 TOP cop Sir Peter Fahy said police are being forced to choose between maintaining buildings and keeping staff, in the wake of biting government cuts as he patrolled the streets of Uppermill.

The Chief Constable of Greater Manchester Police spoke exclusively to the Chronicle after he visited a Pub Watch group in Diggle and went out on the beat with PC Mark Clough.

Sir Peter praised the sense of community in Saddleworth while outlining stark choices facing the force.

He said: Its good to be up here and see the unique challenges and needs of such a rural area with such a strong sense of community.

We are committed to maintaining local policing but we are losing five officers a week and this makes it more and more of a challenge.

More than ever we have to work with Oldham Council in order to provide services in a different way and find different ways we can get support from the public and help local people.

We understand the strength of feeling about keeping local stations and that is a painful issue.

We now have fewer staff working from these buildings. In Failsworth the station has had to move into the town hall. We are doing our best for local people but we are facing choices between buildings and staff and the demand is not going down.

We had to move some officers from Oldham to Manchester city centre to deal with protests this week but then some officers from Manchester will be coming to Oldham for the band contests in Saddleworth this weekend. I went to the Pub Watch in Diggle which was a good example of how people can work together and communities taking action in the context of the decisions we have to make.

Were very keen to get across some of the practical dilemmas we are facing and the reality of the difficult decisions we have to take in the face of further cuts.

His comments come in the wake of Theresa May accusing the police federation of crying wolf over cuts at their annual conference.

She said: You can choose protest  and continue to shout angrily from the sidelines for the next five years. Or you can choose partnership, and work with me to change policing for the better.

I know there are those who say theres no more waste to cut. But I simply do not accept that. It is perfectly possible to make savings without affecting the quality of neighbourhood policing.

There is no ducking the fact that police spending will have to come down again.

The truth is that crime fell in each of those years, its fallen further since, and our country is safer than its ever been.

So please  for your sake and for the thousands of police officers who work so hard every day  this crying wolf has to stop.

Sir Peter admitted that the police were now working more closely with other organisations to find new ways of tackling crime and hoped that devolution would further aid their ability to address local needs.

He said: We are working closer with other bodies and share more information because we are covering the same streets.

This will be one of the practical changes from devolution because well control things here in Greater Manchester and do whats best for people here in Oldham and Saddleworth. It gives us more opportunities and more freedom to address local needs.

He want on to praise the work of local officers and highlighted the importance of seeing frontline issues first-hand.

He said: Its really important that I get out and see the frontline issues. I went to Wythenshawe on Tuesday and Ive now been lucky to get out in Oldham.

The local officers here were outstanding and I was very impressed with their knowledge of the area even down to the sheep.

People in Saddleworth have unique needs and its important that we recognise that and build local links.