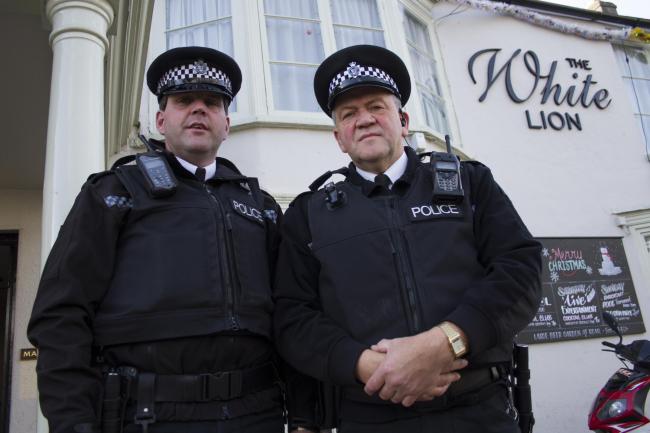 Bottom ofSIX people have been barred from all pubs in Thornbury and Alveston following violence over the two weekends before Christmas.

Both incidents occurred outside the White Lion in Thornbury, as drinkers became violent when being thrown out of the pub.

On Friday December 11, two men and a woman became aggressive towards door staff before smashing a window and kicking the door.

In the early hours of Saturday December 19, three men were violent and verbally abusive to staff. They smashed two windows before trying to break through the door, using a sign outside the pub as a battering ram.

All six are now listed on the Thornbury Pub Watch scheme, which can ban people from licensed premises in the town and Alveston for a year.

I think being banned sends a message that we will not tolerate it in our pubs, said Mark Hamilton, landlord of the White Lion.

It ruins the night for other people, not just for those that cause the trouble.

For example, the people who were sat on the other side of the windows that were smashed could have been injured from the broken glass.

He added: The Pub Watch shows that all the establishments support each other, but its biggest problem is that it can be difficult to identify people from the footage in order to issue the bans.

“Two of the offenders were arrested and are currently on bail, while one is yet to be identified from CCTV
footage.”

The Pub Watch is run through a committee of the pubs in Thornbury and Alveston and is assisted by the local police beat team.

We held an emergency meeting of the Pub Watch group to make sure we could get these individuals barred before the busy weekends over Christmas and New Year, said Thornbury police beat manager PC Sean White.

We had incidents of different degrees every weekend leading up to Christmas but these two were more problematic.

We hope that barring people like this will reduce problems in pubs in the Thornbury and Alveston areas, making them better places for people to socialise.

Throughout the festive period, we are continuing to liaise with pubs and other licensees to reduce the likelihood of other incidents occurring.

If people are responsible for criminal damage, are caught for drug offences or threaten violence then they could be banned.

The scheme has now been operational for just over a year and has just seen its first two offenders removed from the list after serving their bans.

PC White added: We are really pleased with the continued success of the Pub Watch and that all the pubs in the area are behind it, and most importantly, looking out for each other.

When alcohol is in the system it can really bring out the worst in people, and so we encourage people to drink responsibly.

Story and photograph courtesy of the Gazette www.gazetteseries.co.uk