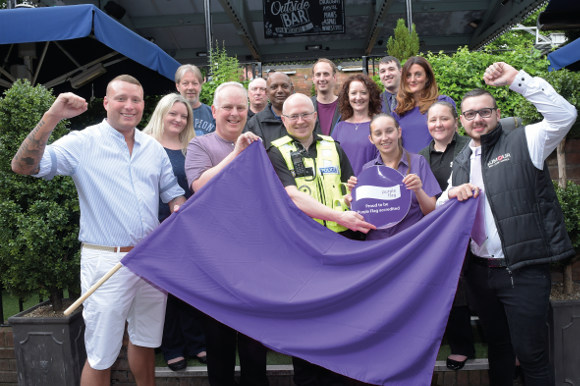 Sutton Coldfield has been given the prestigious Purple Flag award in recognition of its outstanding night time offering.

A NIGHT out in Sutton Coldfield has been recognised as one of the ‘safest, most entertaining, diverse and enjoyable’ in the country after the town receives a prestigious award.

The Royal Town is celebrating after learning it has achieved the prestigious Purple Flag status for its evening and night-time economy (ENTE). Purple Flag is a town and city centre award – similar to the Blue Flag for beaches and Green Flag for parks – which aims to raise the standard and broaden the appeal of town and city centres between the hours of 5pm and 5am.

Areas awarded the Purple Flag are recognised for providing a vibrant and diverse mix of dining, entertainment and culture while promoting the safety and wellbeing of visitors and local residents.

Mike Bushell, manager of the Sutton Coldfield Town Centre Business Improvement District, said: “The award of Purple Flag status is proof that Sutton Coldfield has a varied and safe, evening and nightlife economy. It has been a privilege to work with Paul Letson at Pubwatch and the various business owners to work together to deliver a safer town centre.

“From a BID point of view it was pleasing to receive praise for the introduction of CCTV to the town centre, which has allowed the better direction of resources and led to a fall in arrests, something that the BID worked hard to achieve for Sutton Coldfield.”

Paul Letson, chair of Pubwatch, said: “It is a great honour for Sutton Coldfield to receive Purple Flag status, as well as testament to the hard work from the numerous parties involved. The town centre has a thriving night time economy with food, drink, a cinema and nightclubs all providing entertainment to residents and visitors.

“Sutton Coldfield was praised by the Purple Flag for a number of initiatives in making the town centre a safer and more attractive destination, from the work with the authorities to the Night Pastors, who provide free drinks to those out enjoying the latter parts of the evening.”

Since 2007, the programme has awarded the Purple Flag status to over 65 towns and cities in the UK and Ireland. Purple Flag accredited areas have all reported a consistent increase in footfall and a decrease in crime within the ENTE.

The Purple Flag programme is managed by the Association of Town and City Management (ATCM) which works alongside – a partnership of key stakeholder groups backed by Government, police and businesses, as well as the UK sponsors Diageo Great Britain.

Shanaaz Carroll, CEO of the ATCM said: “There are now almost 70 towns and cities across the UK and Ireland who are proudly flying the Purple Flag after working hard to gain accreditation. The award is not just about safety, but also the vibrancy and diversity of the evening and night-time offer — this can only be achieved by people working together and across the country we are seeing some amazing examples of this type of partnership working.”

Sutton Coldfield will officially receive the Purple Flag new accreditation along with Perth, and a further three towns, Bristol, Derry-Londonderry and Enniskillen who have had their Full Renewal status renewed at an awards ceremony which will take place on June 30 at the ATCM Summer School 25th Anniversary dinner and Purple Flag Awards in Croydon.