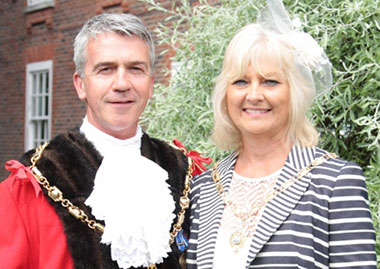 Tory councillor Wayne Ronayne and the group he was with were ejected from Wetherspoons pub The Star, in High Street, following the mayor-making ceremony. The News understands an argument broke out when staff asked the mayors party to leave, with the mayoress Paula Carter allegedly saying they could have the pub shut. Police were called and the group left, with the mayoress then trying to get into Nelsons bar, a few yards away. She was refused and allegedly made the same claim. Both pubs have complained and Cllr Ronayne, who denies any wrongdoing, was given a six-month ban by Pub Watch from 36 pubs and clubs in Gosport, with Ms Carter banned for 12 months after the incident on Wednesday at about 10pm. Richard Horn, 34, was in the pub. He said he saw police arrive and ask the group to leave.Gosports got a bad enough reputation through historical things without this making it even worse, he said. Gosport Pub Watch chairman Phil Cox said: Everybody is treated the same. People need to be treating licensees and staff with respect. But we dont expect the mayor of Gosport, who represents our town, to be (involved in incidents like this). He added hell speak to Gosport Borough Council as Cllr Ronayne sits on the licensing committee. As reported, Cllr Ronayne retained his seat in Christchurch ward on May 22 by just 16 votes. Stephen Brown was the duty manager at Nelsons and was working on the night. He said door staff were ready to refuse the mayoress. A CCTV camera has captured the moment she arrives at the pub. Mr Brown said: She said to me do you know who I am?  I said no, I dont and she said Im the mayoress of Gosport I can have you closed down. I politely said she still wouldnt be coming in, she was clearly in drink and then continued to be rude and had to be dragged away by one of the other members. Nelsons owner Arthur Caraccio added: We expect better behaviour than this. Cllr Peter Chegwyn, leader of the Liberal Democrats, said: Its unbelievable. He should resign as mayor and from the council. Gosport Borough Council declined to comment on the allegation but said Cllr Ronayne does not have a vote on the licensing committee. Its Tory leader Cllr Mark Hook said Pub Watch had acted as judge and jury. He added he understood Cllr Ronayne had been at home after the mayor-making and then went to the pub to get his family to leave.But he added the first citizens need to do a lot of soul searching themselves over their future. Cllr Ronayne said Ms Carter wasnt available for comment and he wasnt aware of any ban. He said: Im not aware of that at this point of time. Im unaware of anything that happened. He added the claims were absolute nonsense. Story and photograph courtesy of Portsmouth News www.thenews.co.uk