Drink spikeys – a brightly coloured device which fits inside the neck of a bottle and to stop the possibility of a drink being spiked – are now available in more than a dozen new licensed premises in the city.

Last year the spikeys were rolled out at all on-campus bars at the University of Sunderland and were widely used by students proving very successful.

Now university officer PC Dan McGwinn has rolled out the safety precaution to dozens more licensed premises in the city. 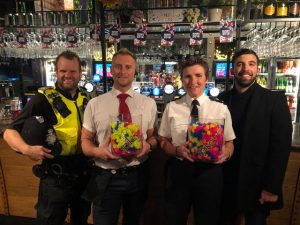 Thousands of the free stoppers will now be delivered to pubs and bars across Sunderland after they received unanimous support from the city’s successful Pubwatch scheme.

Chief Superintendent Sarah Pitt said: “Over the last week, we have welcomed an influx of new students to Sunderland as they begin their university adventure, and officers attended the freshers’ fayre and on-campus events to offer crime prevention advice.

“Those messages apply not only to students but to our communities as a whole, and we will continue to work with partners and all those in the city centre to ensure Sunderland remains a safe place.”

The bottle plugs fit inside the inside of the neck of a bottle leaving only enough room for a straw, stopping anyone from being able to add substances to drinks.

PC McGwinn, who is based at the University of Sunderland’s city centre campus, said that the brightly coloured bottle blockers also act as a reminder of the dangers of drinking too much.

He said: “The anti-drink spiking devices were initially placed in the university bars as a way of promoting safe drinking.

“That proved incredibly successful, and the feedback from students at the university has been that the spikeys are a quick and easy way to seal bottles and ensure drugs or illicit substances cannot be slipped into them.”

Nik Chapman, manager of The Cooper Rose and chair of Sunderland’s Pubwatch, has said Pubwatch welcome the move which will have a positive impact on the city.