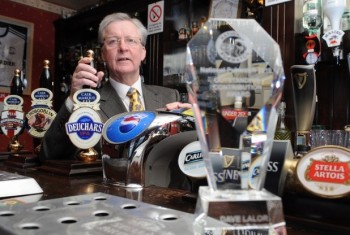 The daughter of a popular Derby landlord credited by police for curbing city hooliganism has described him as a “very well-mannered and educated gentleman” after his death at 61.

Landlord David Lalor ran the Station Inn, Midland Road, for almost thirty years before he retired and moved to Skegness with his wife three years ago.

Mr Lalor started Derby City Pubwatch in the 1980s and, in 2010, was awarded the National Pubwatch Lifetime Achievement Award as “someone who can get things done, always with humour and a professional, considered approach.”
His daughter Angela Bainbridge said the pub industry played a central role in his life. She said: “He was a landlord for 30 years in Derby and he was very dedicated to pub work. He just liked chatting to people and being surrounded by people – he was a people person.

“He liked the Post Office across the road as they used to come in for leaving dos and that sort of thing. Staff from the Derbyshire Royal Infirmary used to come in as well. He loved those people.

“Because he ran his own pub, pool was quite a big thing for him. He didn’t have much time for any other activities but he did win the Landlord’s Cup for five years…they gave him the cup in the end.”

Ms Bainbridge said her father – who in 2005 had an award-winning beer named after him – moved to Chapel St Leonards, near Skegness, three years ago. She told the Derby Telegraph he had made some “lovely friends” and had even become captain of his pool team. He leaves wife Lynn, who moved to Chapel St Leonards with Mr Lalor, and his children, Ms Bainbridge and Tina Allison.
Several Derbyshire police offers have also paid tribute to Mr Lalor’s innovation in starting the city’s Pubwatch scheme and one even remarked that it would have folded if not for his perseverance.

When Mr Lalor was presented with the National Pubwatch Lifetime Achievement Award in 2010, British Institute of Innkeeping boss Steve Howe praised the effect he had made on the city’s community.

Mr Howe said: “David has shown outstanding commitment to raising standards and improving relations with other stakeholders to the benefit of the trade, the local economy and the general public.”

PC Tenielle Hardwick, who serves the city centre and has been a police officer for 13 years, worked with Mr Lalor as a licensing officer between 2008 and 2011.

She said: “He was well-liked and he did a lot for Derbyshire police. He was just a lovely man. I think he was well-respected and people didn’t go into his pub and cause trouble. He was definitely respected among my colleagues in the police.”

Another licensing officer, PC Mark Dunn, said Derbyshire cops felt the difference once he retired from running the Station Inn and left for Skegness. He said: “David was a genuinely nice guy who was dedicated to Pubwatch. There were times when if it wasn’t for him the scheme would have folded. We had a great working relationship and he was missed when he retired.”

A funeral service for Mr Lalor, who passed away last Tuesday, will be held in Chapel St Leonards on Thursday, September 29.