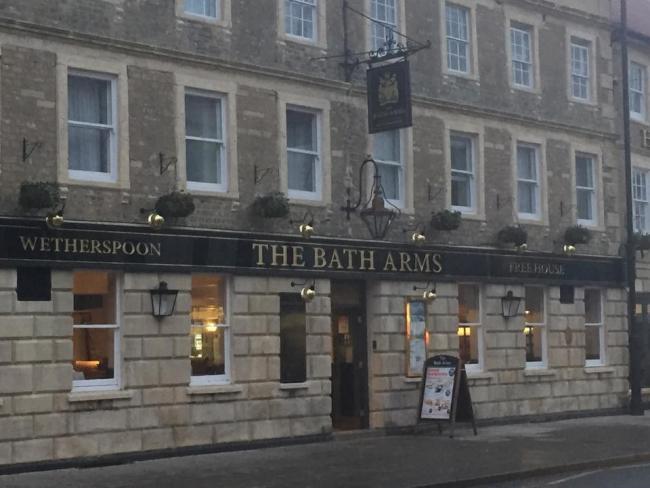 The Bath Arms in Warminster

A WILTSHIRE man has been banned for life from all Warminster pubs after allegedly leaping over a bar to attack a member of staff.

The Warminster Pubwatch group says the incident at the Bath Arms Wetherspoons pub in the Market Place has appalled members of the group.

The group’s deputy chairman Nick Pitcher, said: “The most serious incident happened at the Wetherspoons pub in the Market Place where an assailant jumped over the bar and physically attacked a member of the staff resulting in serious injury.

“This was considered to be a very serious offence and that person has been banned from Warminster Pubwatch pubs for life.

“In all the 13 years I have been on the Warminster Pubwatch group we have never given a life ban before.

“It was a very serious incident and the assault is under investigation by Wiltshire Police so I can’t say anymore.

“On another occasion a man was assaulted at AJ’s Nightclub and had severe damage to his face and nose. The offender was banned for two years.

“Four people were banned for six months as a result of serious verbal abuse to staff and members of the public at both Wetherspoons and AJ’s. The offenders cannot be named as they are under police investigation.

“This type of behaviour in Warminster is not acceptable and will always be dealt with very severely by the Pubwatch committee and all offences will be reported to the police for prosecution.”

The town has nine pubs; three clubs for football, rugby, cricket; the Conservative Club, and two nightclubs: AJ’s and the Boston Shaker.

He added: “We are all of one mind and are working together to ensure that Warminster is a safe environment for everyone to enjoy themselves in a very safe and secure atmosphere.

“We are lucky to live in a town where there are so few incidents, but where there are we will act quickly to ensure fun nights out. We only want everybody to have a great time and in what is, such a wonderful town.”