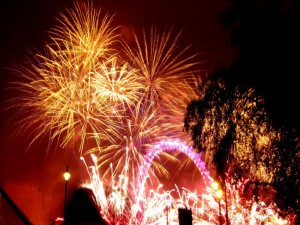 National Pubwatch is currently sponsoring the training of volunteers with Westminster Street Pastors. This update has been compiled for us by Brian Arnott at Ascension Trust.

Our ages ranged from 33 to 78. Some of us managed to be right in the front row on the Embankment and we managed to enjoy the magnificent firework display put on by London. Generally speaking everywhere we went people were very well behaved and just having fun in a safe environment. I am pleased to report we had no major incidents to help out with apart from a few cuts and bruises, and people needing directions.

I think however we did experience a First. I am told that one of our team was offered a marriage proposal by one of the revellers. I think she refused but the incident went in our book! On a personnel note, my team managed to walk down to Walkabout Temple and when we arrived at about 2.30 the party was in full swing, but even so, the management team came out and made us very welcome, indeed I had my first bacon butty of the year.

We were last back to base at just after 3am and following a debriefing we were stood down at just before 4am. Looking at the statistics for the evening, I note we picked up in excess of 300 bottles, ( probably many more as most teams just gave up counting!!), lots of broken glass and we handed out at least 32 pairs of flip flops, 2 blankets and loads of bottled water which had been donated by Walkabout Temple.

As previously mentioned we can say that generally speaking everyone was very well behaved and looked as if they had had a memorable evening. The major thing that stood out to me was the number of revellers around, they were certainly down on previous years which I suppose was not surprising, bearing in mind the security problems that France and Belgium had experienced. Despite that, I am so pleased that the evening was not called off and I would certainly recommend the evening for our future ongoing training programme.