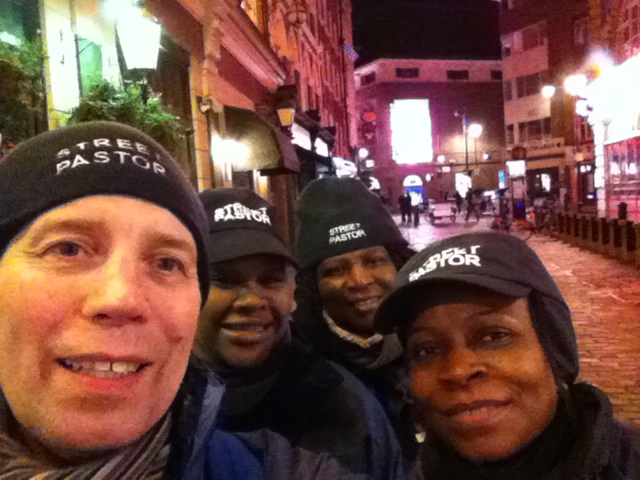 So, 2 weeks after the New Years Eve Central London event, Westminster Street Pastors were back on patrol last weekend. Teams patrolled in Victoria and the Strand, and in Soho and all areas in between, while a third team patrolled the central London Thames bridges in support of the Metropolitan Police Service Suicide Prevention Strategy.

In response to the support given by National Pubwatch particular notice was given to the pubs on our patrol route, including along Victoria Street, Whitehall, Charing Cross Road, Leicester Square and Soho itself.

The first bitingly cold weekend of the winter meant that groups outside the premises were thin on the ground, and it seemed that the Friday night street population was generally still quiet after the New Year. A homeless man accepted a space blanket which was a potential life saver if he ended up without shelter. Elsewhere in Shaftsbury Avenue, there were still girls grateful for the gift of a pair of flip flops after a night in their high heels, which reduced the potential for a trip to our over stretched A&E departments. On Victoria Station, out team were able to assist a quadriplegic man in a wheelchair travelling home, and see him onto the train.

We met and engaged with the Police Officers patrolling in the Impact Zone around Leicester Square. One Supervisor was hoping we might be able to attend a future Immigration Operation where our soft skills are particularly welcomed, but as yet we do not have the numbers to commit to more than our Friday night patrols. Perhaps one day? Elsewhere in London, where Street Pastor teams have been running for 10 years or more, they have the resources to put teams on patrol several times a week. That would be our aspiration.

Meanwhile we gave lollipops to the ubiquitous pedicab drivers  building relationships and a sense of community, creating cohesion between different parts of the central London street populations, and making Central London generally safer for everyone as a result. Our next patrol is 5th February and we will update you more after that.