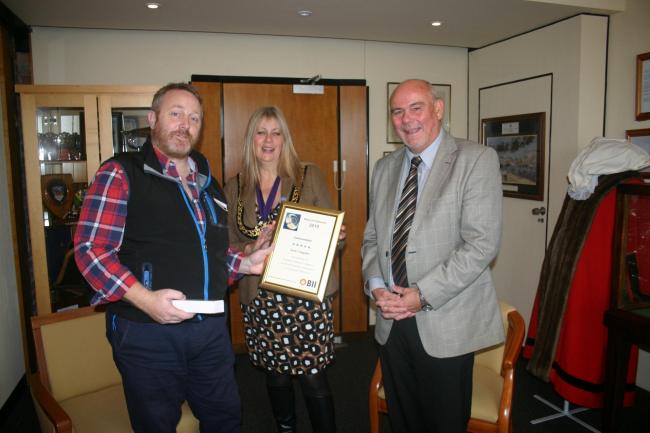 Keith Treggiden today (18/11/15) received a National Pubwatch Commendation at Weymouth and Portland Council Offices, for his outstanding contribution to Weymouth Pubwatch Scheme. Keith was nominated by the schemes Secretary Mike Hale, who acknowledged the proactive role that Keith has taken in promoting the Pubwatch and working in partnership with other stakeholders in the town over the last nine years.

The nomination was supported by the Weymouth Neighbourhood Inspector Peter Browning, Sue Moore the Councils Head of Business Licensing and Simon Bice the Police Licensing Officer.

Inspector Browning said Keith quickly impressed me with his enthusiasm and support for the licensing industry in Weymouth and was keen to promote best practice whilst being open to developing new tactics to improve the night time economy and atmosphere for residents and visitors alike. Keith clearly has the support and confidence of the other licensed premises within the scheme which has been paramount in the successes that have been achieved in the last 18 months. This has included a voluntary reduction in the licensing hours generally from 24/7 to 4am during the week and 5am at weekends, the introduction of the nationally accredited Best Bar None Scheme (launched this summer with nearly 20 participants) and gaining positive links with the Business Improvement District (BID). This has led to significant improvement in the professional management of businesses in Weymouth, which is a testament to Keiths drive and determination

Keith Treggiden, said: I wasnt expecting to receive this award. Im really touched to receive it. I am happy to see that all the hard work and effort does not go unrecognised.

The Pubwatch scheme has changed significantly over the years and what Im most pleased to see is that the membership grows year on year. All members get the full support from being in a national scheme.

Mayor of Weymouth and Portland, Cllr Christine James, said: Keith has done a great job in his role as Chairman. It was my pleasure to be able to arrange for Pubwatch to come and present Keith his award in person.

I would like to thank Keith and the other bars and clubs signed up to the scheme for their continuous hard work to showcase best practice in their businesses and help improve the night time economy of the borough.

Keith will be stepping down as chairman at the Pubwatch Annual General Meeting in February 2016 and a new chairman will be elected at the meeting.