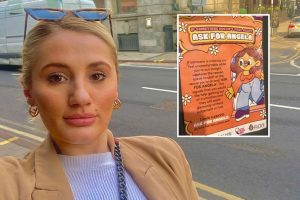 Reporter Lucy Marshall went out to bars and pubs in Leeds to test out the Ask Angela scheme (Image: Lucy Marshall)

It’s a warm afternoon in Leeds, the sun is shining, sunglasses are on, and I’m ready for a crisp pint in the pub.

We’re ‘back to normal’ after the pandemic which means punters are soaking up all the fun back at bars, pubs, and nightclubs – life is good. But there’s no denying some people feel nervous after a surge in spiking cases last year left many, including myself, wondering if going on a night out is really worth the risk.

One scheme, which has been recognised nationally, is Ask Angela. Its aim is to help people who feel unsafe in night time venues.

Women (predominantly) can go up to a bar or staff member and ask if they could speak to a woman named Angela. The special code word aims to be met with support and measures to ensure their safety.

Designed to keep the city safe at night, the premise is clearly commendable – especially as a recent survey of 800 workers in the night-time economy found that 56 per cent had encountered situations involving vulnerable people (meaning anything from being intoxicated to alone to socially restricted) at work on a weekly basis.

The scheme has helped many people in its five-year reign, but I personally have never heard of anyone using it. Before my current job I worked in a number of hospitality venues and never experienced anyone using the code word or have had to use it myself, thankfully.

I wanted to see how the scheme shaped up for Leeds. I went out in the city centre to see if it really works, and this is what I found.

I decided to see which bars and pubs have the scheme in place, and how often customers are using it.

What popular bars and pubs have to say

Popular spot for Hamburgers and cocktails, Almost Famous in Great George Street have signs up for Ask Angela. The typical signs have a distinct blue and pink logo, but this spot decided to use a cartoon character on theirs. I like their version – it stands out and isn’t a scary-looking poster and would make me feel comfortable to ask.

A front of house staff member said: “I feel like Ask Angela is all around now so I would definitely know if someone came up and said can you get me Angela. Fortunately, no one that I have seen in here has had to use it which is obviously good but it is there if people need it. We have signs in the girls’ toilets too.”

Meanwhile in Nation of Shop Keepers close by said they have had cases of people using the scheme. A bar staff member said: “We do use Ask Angela here. I’ve probably had two cases within the past six months that I can recall, however they are definitely few and far between.”

Both Roxy’s Ballroom in Boar Lane, and Cargo in Albion Street use Ask Angela. A staff member at Cargo said: “We had a case about two months ago. And then we had one more recently a girl had been into a popular nightclub, who I know don’t have the service, and said she had been sexually assaulted. So, people come here from other venues too because they know we have it.”

The Decanter in Park Row has trained its staff to know about Ask Angela. One staff member added: “We had an incident last weekend and I feel like the girl could have used it but didn’t. Obviously in a dangerous situation it can be nerve wracking. But we take the word Angela very seriously here.”

I found that in every venue I visited all staff members knew about the scheme and I believe are taking it seriously. And that makes me feel super safe.

However, I did notice that a lot of the Ask Angela signs were not highly visible. Most are placed on the back doors of the ladies’ bathrooms, or on a side wall of the bar.

Although it is essentially supposed to be a ‘secret code’, I do feel that the signs should be more visible. While people who have been going out for a number of years may be familiar with the scheme, 18-year-old’s who are partying for the first time might not know it exists.

What’s more I think if perpetrators making people feel unsafe can see that hospitality venues are taking it seriously, hopefully they will think twice before being a daft creep. The signs have a police sign on the bottom too so why not.

What also came to my attention was that hospitality workers repeatedly kept saying that not many people are using the scheme. When you look at how many reports of sexual assault or spiking or reported to the police, versus how many people use the Ask Angela scheme, the numbers don’t match.

So, I think as women we need to take charge and have the confidence to call out when we feel unsafe. While I am speaking from the perspective of someone who thankfully has never had to use it, I do think that I would urge any of my friends or family members to use it immediately if they felt unsafe before things potentially take a dark turn.

Overall, I’m thankful that as a new Leeds resident I have the support of popular hospitality venues protecting my safety while going out. But I hope that girls who do feel unsafe, don’t just know that, but feel comfortable enough to use it.

National Pubwatch and Best Bar None suggest that you consider the following: