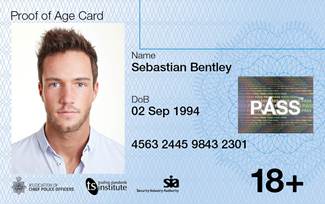 National Pubwatch realises that there is very strong pressure on operators to refuse entry to young people, who they believe to be under 18; regardless of the form of ID they may have in their possession. National Pubwatch understands the need to have confidence in the forms of ID that you and your staff will accept. That is why NPW, together with the Home Office, the Association of Chief Police Officers, the Security Industry Authority and the Trading Standards Institute ALL support the Proof of Age Standards Scheme (PASS).

The vast majority of pub companies also support PASS and include reference to it in their company policies and procedures as they know that the stringent application and accreditation process followed by PASS approved card issuers should give you that confidence and provide an important safeguard for you and your business.

However we still aware of young people in possession of PASS cards being turned away from some venues by staff who say that they will only accept Passports and Driving licences. And it seems that this refusal is based on several misguided myths that continue to be promulgated amongst licensees and Pubwatch schemes. For example one of the commonest myths is that you can buy a fake PASS hologram trademark card on the internet. Whilst it would be foolish to suggest that it isnt possible to purchase a so called a novelty fake ID, the PASS scheme is unaware of any fake PASS cards being issued in this way and if given evidence of such forgery would vigorously investigate.

So are there any faked PASS cards out there and have they been seized? So far we have only anecdotal evidence that they exist  but if you do have that evidence, then PASS would be pleased to hear from you so that they can examine the cards. In the meantime we would urge you to visit the PASS website www.pass-scheme.org.uk to find out the facts.