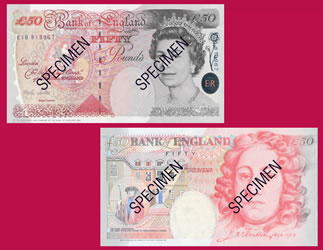 The Bank of England has announced that the old style L50 note, featuring Sir John Houblon on the reverse, will be withdrawn from circulation on 30 April 2014.

Further information can be found on the attached poster, or via their website www.bankofengland.co.uk/banknotes/Pages/fiftywithdrawal .

The main points to note are:

A poster is available below to download for information of your staff.