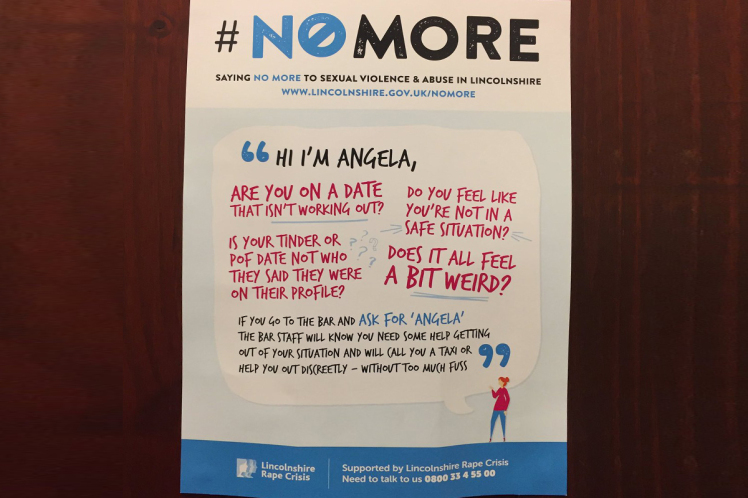 It’s always awful when you’re on a date that’s not going well.

It may not just be that they’re not quite right for you. They may be making you feel really uncomfortable.

You might even be worried that things could take a sinister turn – and you don’t know how to get out of it.

Well, Lincolnshire county council has had a pretty excellent idea for people trapped in this situation.

Posters in bars and clubs tell people that if they need some subtle help, they can go to the bar and ‘ask for Angela’.

A photo of the poster, which was part of the council’s ‘NO MORE’ campaign which ran until October 2, was tweeted by Isobel O’Brien – and retweeted more than 19,000 times.

‘Hi I’m Angela,’ the poster says. ‘Are you on a date that isn’t working out? Do you feel like you’re not in a safe situation? Is your Tinder or POF [Plenty of Fish] date not who they said they were on their profile? Does it all feel a bit weird?

‘If you go to the bar and ask for ‘Angela’ the bar staff will know you need some help getting out of your situation and will call you a taxi or help you out discreetly – without too much fuss.’

People online thought it was a really good idea, and hoped that it could become a nationwide thing.

And the woman who came up with the campaign, Hayley Child, the Substance Misuse Strategy Coordinator for the council, added that she was pleased to see the ‘No More’ poster had gone viral.

She also told Buzzfeed that they planned to relaunch the campaign in February 2017, for National Sexual Violence and Abuse Awareness Week.

We hope this idea makes its way across the country.
Story and photographs courtesy of Metro www.metro.co.uk