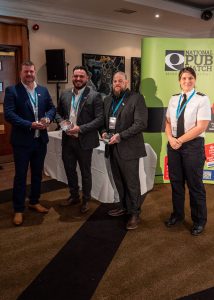 Three door supervisors – Lee Jones, Jonathan Parry and Dafydd Murray – have received Bravery and Meritorious Conduct Awards for saving the life of a customer and fearlessly detaining the offender.

It was in August 2021 that a customer suffered a horrific knife attack at One47 Club in Llandudno, Wales.

It was 3am and the victim was sitting alone in a seating booth of the venue, near to the offender. CCTV footage later showed that the offender approached the victim and leaned in to chat before revealing that he was armed with a cut throat razor. He grabbed hold of the victim and slashed his throat and face before calmly walking away.

Bleeding and in shock, the victim approached door supervisor Dafydd Murray who noticed large open wounds to his ear, side of neck and his throat. He aided the victim to lay on the floor where he managed to compress the neck wound to minimise blood loss, whilst talking to the victim to keep him calm until ambulance crew arrived on the scene.

Meanwhile, door supervisor Lee Jones noticed his colleague Dafydd helping the victim on the floor and asked other staff members to review the CCTV footage to identify the offender.

Outside the club the offender disposed of the razor in a recycling bin. He then returned to the club. Without knowing that the offender was no longer armed, door supervisors Jonathan Parry and Lee Jones restrained him until police arrived.

Meanwhile colleagues secured the venue, customers and staff, to ensure minimal contamination of the crime scene.

The offender was later sentenced to 10 years and four months imprisonment for wounding with intent.

The judge praised those involved in saving the victims life, calling them “hero’s just doing their jobs.”

Club One47 and Guardian Protection Unit received a letter of commendation from North Wales Police praising the actions of staff in securing the scene and detaining the suspect.

Lee Jones said: “As door supervisors we are here to keep people safe. It is a massive thing to be recognised for doing what is just part of our job. To have the National Pubwatch Awards given to the three of us is such a massive thing.”

Jonathan Parry said: “We work together as a team and are like family. It is fantastic to be recognised. But I was just doing my job at the end of the day.”