4/5/22: Story courtesy of Beyond Radio www.beyondradion.co.uk 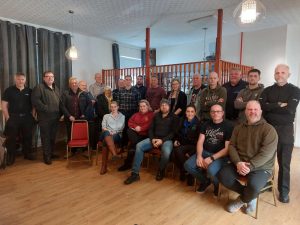 Publicans and police attended the Morecambe Pubwatch meeting on Wednesday

Morecambe publicans have joined forces with the police to send a message to troublemakers to “behave yourselves or you won’t drink in our town”.

They are also working together with Lancaster licensees to ensure banning orders extend across both Morecambe and Lancaster.

This comes in the wake of a number of night-time criminal incidents in Morecambe town centre this year.

There are currently around 40 people on Morecambe Pubwatch banning orders.

“If you’re rowdy and you commit an offence in one pub and you leave, it will be radio’d on, and you shouldn’t get access to the next Pubwatch venue. We’re trying to keep everywhere civil so everyone can have a good night.

Mr Pearson said Morecambe was still “a great place to go out”.

“Yes there have been some incidents, but they are one-off incidents, they don’t happen all the time.

“Morecambe still is a safe place and Pubwatch will play its part in making it a safe place for people to come out and enjoy themselves.

“No matter which town you are, there is always a minority of people who want to spoil it for other people, and us as licensees, we will stamp that out and make Morecambe good again.

“I think Morecambe has a bright future. The licensed trade on the whole is doing very well, pubs are quite busy, the town centre is picking up again.” 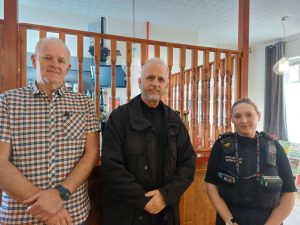 Andy Taylor said: “Pubwatch is run by the pubs themselves and they do it because they care.

“They want to try to keep out the wrong people, and let the decent people in to have a night out and enjoy themselves.

“Every month we come to the Pubwatch meeting and share what’s been happening in terms of crimes. If someone has been charged, cautioned or had a fixed penalty notice, we can share a photograph, a name and address of those people, and then at Pubwatch they can discuss what should happen to that person, whether it’s a warning letter or a ban.

“Nine times out of 10 it’s a ban, it can be three months to five years, and all the pubs will work together to make sure those people are kept out of the pubs.

“Speaking to some people, they would prefer to be charged than they would to have a Pubwatch ban, because they can’t get into some of their local boozers to have a pint.”

The latest Morecambe Pubwatch meeting was held at The Exchange pub in the West End on Wednesday morning.